Life is Just Too Much

My friend, Tommy, was my captain/boss for many years on his charter fishing boat. He’s been my mentor, confidante, screaming board, and father-figure of 15 yrs. He is battling lung cancer. He says he’s gonna win his fight; but, seeing him try is convincing me his chances aren’t good. 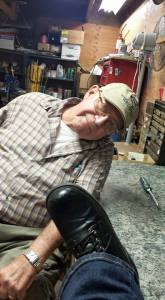 Every year Tommy (shown here) and I drive the boat upriver to haul out and do bottom paint, zincs, etc. I always take a picture of my boot and him driving. Since neither of us have health enough to fish, we settled for a land shot.

A few weeks ago, his wife, Nok (whom I call “Honey”) called me the day after a phone conversation I had with Tommy where he was talking jibberish and told me he was confused. I went to his home and found him sitting in his recliner, his head bald from chemo and radiation. I asked him who I was and he didn’t know. I asked him what year it was and he said, “1979.” I called our shared doctor and took him in immediately. Dr Kevin then asked a few more questions to which Tommy failed miserably answering. Kevin left to contact the oncologists and make arrangements for me to drive him to the local hospital or possibly to the one in Olympia, 150 miles east. I would drive Tommy to India, were it necessary.

We found out his entire brain was septic after the removal of a cancerous tumor was removed a month prior. The infection had filled his head and caused him to lose his memories. He was also severely dehydrated. He stayed in hospital for 4 days.

I have MCTD – a type of Lupus. It took over my world 4 yrs ago with extreme elbow pain. It then moved into all of my joints, began making me unbelievably exhausted, and the final straw was when I couldn’t walk due to the agony in my ankles. Some of the 8 quacks (aka doctors) I met with said I was faking it for drugs. A few doctors gave me an industrial-sized jar of drugs. No one wanted to figure out what was wrong with me. Two years ago, my right hand started losing strength and then the pinkie and ring fingers became paralyzed. My right arm started throbbing and spasming…yep, sure am faking it. Found out I had disks smashing on nerves. This could also be why my ankles feel like there’s ground up glass in them…or could be the lupus. But even with stringent regiment of heavy doses of Prednisone, my ankles are always screaming. It believe comparing it to broken bones would be appropriate.

While Tommy is fighting for his life, he is selling his boat for top dollar, selling his land, as well. Has a fantastic loving wife who is from Thailand, and they had decided Tommy would retire in 2015 and they would move to Thailand to live relatively wealthy and warm.

They have each other for support. They have a plan. They have assets to sell and a retirement system Tommy earned working for the state. They have dreams and hopes and goals. And I want more than anything in the world for them to reach those goals.

Every single morning and night, I pray to Yahweh to give me Tommy’s disease. Bless me with his cancer and remove it from him. GIVE IT TO ME! PLEASE! Why? Why not?

I have nothing left. Before my illnesses, my goal was to buy raw land up North River or John’s River area and build a my cob cottage and live off the land. I had saved over 14 yrs a grand total of $20,000. I was gonna continue living in my broken-down motorhome and keep saving for 5 more yrs and go land hunting. I had everything well-planned. I worked with Tommy for the state in the winter, earning a pittance of retirement savings. But, before Obamacare, I had to pay cash for the 8 quacks I visited. I paid cash for an MRI – for which that asshole doctor also accused me of faking for drugs (which I already had and who the HELL would pay cash for an MRI if they were faking????). I was spending my savings on rent cuz I couldn’t handle working 7 days a week fishing anymore. On my days off, I laid on my couch praying for a doctor to help me.

So, I’m done. I give up. I’ve lost everything. I can’t get on Disability because of disgusting government only gives handouts to those who are drug addicts or alcoholics who won’t work. For me to get SSI/SSD, I must be unemployed for at least a year – preferably longer. I was lucky enough to find work fixing fishing reels for a man who I am quite sure is bipolar – one minutes he kind and nice…an hour later, he’s verbally and mentally abusive. He won’t hire me as an employee – only a contractor. So, after a year of working for him in what I believed was ‘under the table’ (I told him it was the only way I could work – and he never asked me for my SS# or had me sign a contract), he dumped 2014’s taxes on my shoulders, lost me my Disability claim I’d worked on for 2 yrs. So, now I must pay $100/month for last year’s tax debt, and quarterlies for this year’s.

I had to give my motorhome away as it was falling apart. So, I now rent a house. I have 5 hens for eggs, 3 dogs (mine, my daughter’s and I rescue for HAVA), and parakeet (my granddaughter’s). My debts are high enough, but I also owe Sallie Mae $40,000 for an education by a technical school (Court Reporting Institute of Seattle) that was shut down by the state for fraudulent education practices.

And I’m sick. Oh fuck. I’m sick. I’m trying to work 7 hr a day, 5 days a week and I can no longer handle even that. I have 3 jobs: reel repair, I work 1 night at the local VFW in the kitchen (tried to bartend but couldn’t remember drink orders or walk), and I care for an 86-yr old friend; cleaning her house once a week and shopping for her on occasion. All of these jobs pay wages lower than what I made in 1986.

To state, “I have nothing left to give” is a laugh. I have no partner, I’ve been single since my husband left me in 1997. I don’t ever want another partner, boyfriend, or even a ‘fuck buddy.’ My friends are many, but I have cut everyone off as I hurt SO much, I cannot accept invitations to BBQs, baby showers, dinners, etc. I work. I mow my lawn, the neighbor’s lawn (for the use of their hottub). I clean my house. That’s it. That is my life.

So why should I keep living? I have NO JOY IN LIFE anymore. My blessed daughter, Salena, sends me money for the pretend reason of ‘dog and bird food.’ But no dog or bird eats the amount she generously sends me on occasion and believe me when I tell you how humiliating it is for me to hope she does. I am ashamed.

I’ve been a loser all my life. I was a crack addict until my husband had had enough. He and I were both alcoholics – but he preferred to run away with a lady who could drink with him and not do coke. I am 17 yrs clean and sober. Alone. Broke, Pain. My life is a living hell.

My son, Aaron, hasn’t talked to me in 3 yrs because I got mad at him for standing me up on his birthday. Yeah, being his mom means I can drive 300+ miles round-trip for his birthday, spend $300 on Cirque du Soliel tickets that he blows off to go play golf instead and how DARE I call him out on it. Yep, threw me away like a piece of crap. My mother, a horrendous person of evil and terror, is his favorite ‘mom.’ She physically and emotionally abused me and my sister for the first 15 yrs of our life. After that, both me and my sister left her house and went out into the world on our own. She was reported to the state as a child abuser. But, me being still terrified of her after my kids were born, allowed her run rough-shod over my kids until she had convinced my son I was the ‘piece of shit’ (her fav term for me) and my son should only love her. Well, she got her wish.

So there it is. My 54 yrs on the planet and I am laying here on my couch on a beautifully, warm sunny summer’s day. I’m nauseated so much, I can’t keep a glass of water down. Right now, my neck and ankles hurt and I’m using my cane. It’s Monday, which means I should be at Job #1 and then to Inger’s to clean. I don’t even wanna call her and tell her I’m too sick to come. Interaction with others is a huge drain to me…I don’t want to tell anyone I am sick today.

I am so alone. Life has no joy. None. None whatsoever. Every single day is filled with trying to get out of bed. Trying to get dressed and to work. Every single day. There is nothing fun. I can’t afford to not work when I can. I don’t get to go anywhere other than to work. I use to drive to Seattle and visit friends and my daughter’s family…not any more. Can’t afford it.

I use to love to mow my lawn, work in my garden. Go to my daughter’s and clean her house for her, visit my grandkids. Not any more.

When I took Tommy to hospital, I was feeling really good that week. My doctor had put me on a new drug and it was helping! I even called him and let him know that we may have found a combination of meds that were working; however, seeing my sweet, kind, Tommy so lost and sick; taking him to the hospital, holding up his wife as she cried, talking to 5 doctors that were calling me for appointments, info to pass on to his wife, then having the entire fishing fleet texting me as to ‘what happened’ to Tommy – it was 4 days of extreme stress for me. And I crashed…hard. The day I put Tommy in hospital, I drove 200 miles round-trip to pick up my 14 yr old grandson and his friend to come visit for 6 days. That next day, I was so sick from the Lupus, from the Lupus being triggered by the stress, that I was on my couch, unable to think, move, or eat. No one was here for me. No one came over to see how I was doing. I had my grandson and I am quite sure his presence got me moving quicker than were he not here. My love for him kept me going…until he left, that is. Then I spent 2 days in bed or on the couch, and another day just trying to walk again.

So, please Yahweh, bless me with Tommy’s cancer. GIVE IT TO ME! Give Tommy life and his wife, his retirement. Give him happiness that he deserves. Give him his friends and Thailand.

Give me eternal sleep. Give me rest. I won’t fight the cancer – I will just let it consume me … it can devour me whole, as long as in the end, I can finally rest in peace.

This entry was posted in Chronic Illness, Health and tagged chonic illness, death, give it to me, lupus, pain, peace, rest, tired, tommy. Bookmark the permalink.